What is Computer Data Storage?

Computer Data Storage is a piece of technology that makes it possible to store digital data permanently or temporarily in an organized manner. This structured way of storing makes the subsequent access to the data easier to retrieve. The recording media that hold the digital data is called as Data Storage Device.

Data Storage Devices are mainly categorized into Primary Storage and Secondary Storage. The below diagram shows how it further branches out to several divisions based on the attributes and functionality. 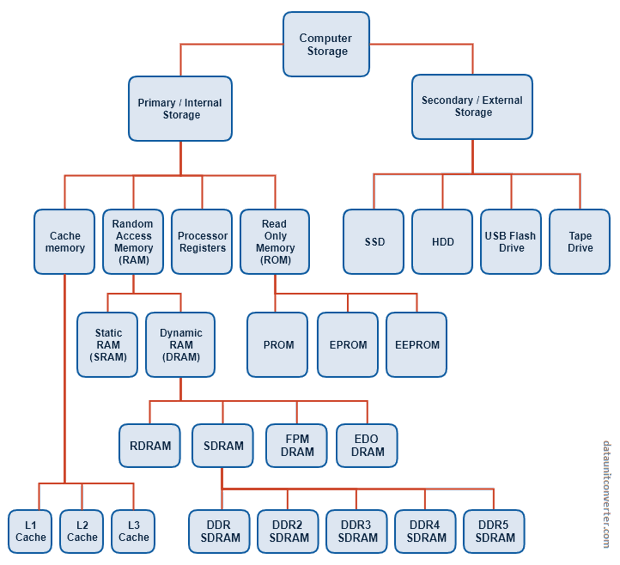 Let us have a brief look and explore each one of these storage devices.

A Storage device that can be directly accessed by the CPU is labeled as primary storage. It is also called Internal Memory or Prime memory. This type of storage mainly includes the below devices. 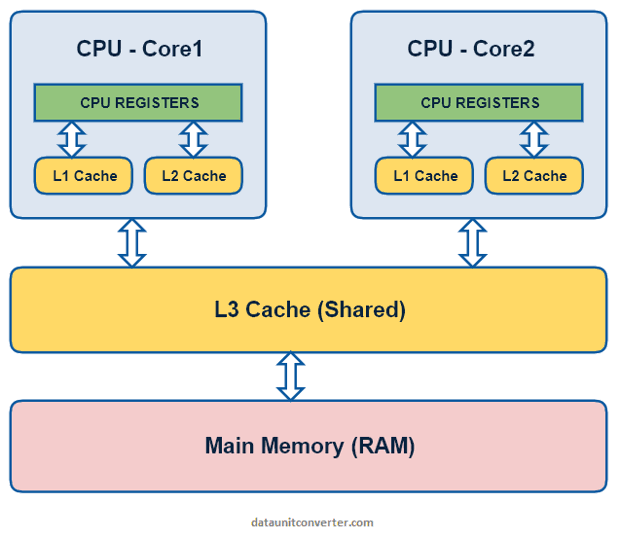 This is the fastest of all computer data storage and resides within the CPU itself. Each register typically holds a word of data (often 32 or 64 bits). Most latest CPU's have between 16 and 64 General Purpose Registers.

Cache memory is positioned between the registers and the main memory storage. It stores the most frequently used data from main memory for faster access to the CPU. There are primarily 3 types of cache memory.

L2 and L3 caches come in much larger size compared to the L1 cache. It typically ranges between 512KB to a few MBs.

All the primary storage devices mentioned above are volatile, i.e. it doesn't hold any data once powered-off and empty on start-up. Hence, non-volatile primary storage containing a small start-up program BIOS(Basic Input Output System) is used to bootstrap the computer. This program loads the larger programs like Operating System from the Secondary storage devices( HDD, USB ) to the main memory for execution.

Read-Only Memory( ROM) modules are typically used for this purpose to prevent the accidental overwritten of data. Following are some of the widely used ROMs.

Main memory connects to CPU via Data Bus and Address Bus. It is also called RAM (Random Access Memory), because the CPU can access the data stored in any section of the memory directly, rather than in sequential order.

RAM is one of the faster types of memory which stores the programs and data required to be processed by the CPU. It is volatile; that means when the computer shutdown, all the data stored in RAM will be deleted.

Following are some of the examples of Secondary storage devices

Hard Disk Drives(HDD), Solid State Drives (SSD), and USB Flash Drives are the most commonly used secondary storage in modern computers. Let us have a detailed look at each of them.

Hard Disk Drive is an electro-mechanical device that can store digital data in magnetic storage. It is non-volatile storage, retains the written data even it is powered off. 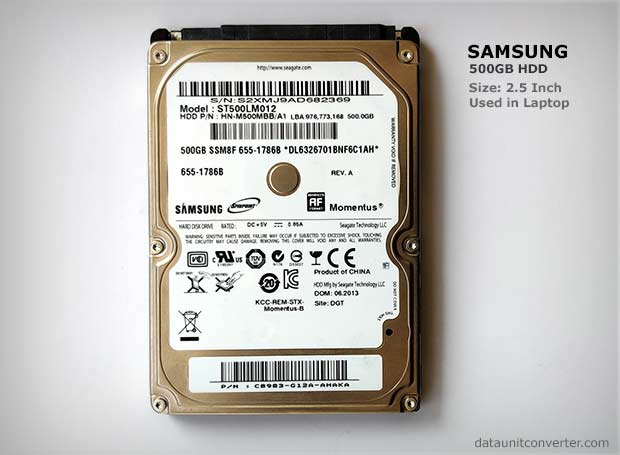 A Hard Disk contains rotating discs called platters, coated with magnetic material attached to a spindle. With the use of a moving actuator arm, it can read and write data to the discs in a random-access manner. This enables the HDD to store and retrieve digital information in any order.

SSD does not contain any moving mechanical parts, instead, it uses NAND Flash memory to store the data in semiconductor cells.

USB Flash drive is a portable data storage device with a USB interface. It uses Flash Memory to store digital data. Most modern Operating systems natively recognize Flash drive while plugging it into a USB port.

USB Flash Drive is also called a Pen Drive, USB Stick, or a USB Thumb drive. IBM brought the first USB Flash Drive into the market in 2000 - the size was 8MB. Since then USB Stick went through gone through many transitions, especially adopting each new type of USB connectors (USB-A, USB-B, USB-C, etc..), resulting in increased data transfer rates. Nowadays, we can find Thumb Drives with a capacity ranging from 1GB to a few GBs in the market.