5 ShortCuts to Capture Screenshots in Windows 10

We can use the above key combination to take a screenshot of the entire screen or a portion. Let us have a detailed look at each of these methods.

Press PrtScn (Print Screen) to capture the entire screen. The screenshot will be copied to Clipboard, and we can paste it into any Application.

We can use the shortcut key Ctrl+V to directly paste the contents from Clipboard to the applications like Paint, Word, PowerPoint. Some programs like GMail Compose will also provide a right-click popup menu that will show an option to paste the image. 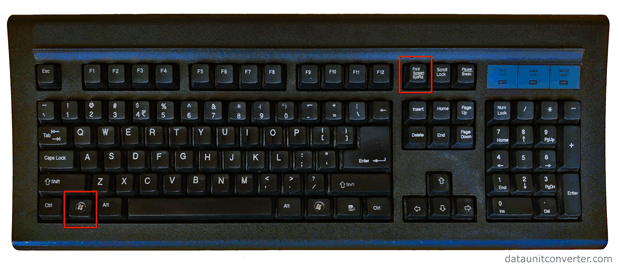 2. Capture Fullscreen and Save to disk

Press and hold the Windows logo key and then press the PrtScn key. We can see the entire screen go dim once and back to normal brightness.

This will capture the entire screen and copy it to the clipboard that can be pasted later in any Application (same as method 1 described above). In addition to that, it will also create a PNG image file automatically in the following directory with a name prefixed with "Screenshot".

The file will be created in the following directory:
C:\Users\[username]\Pictures\Screenshots

3. Capture Screenshot of the active window

Sometimes we want to take a screenshot of only the active window, not the entire screen. We can do this by pressing the PrtScn key while pressing and holding the Alt key.

4. Capture Screenshot of the active window and Save to disk

We can capture the screenshot of an active window and save it in the local disk by pressing the Windows logo key + Alt key and then press the PrtScn key.

The Image file will be automatically created and saved in PNG format suffixed with the date and time when it is captured. These are saved in C:\Users\[username]\Videos\Captures directory.

Alternatively, we can invoke the XBOX Game bar using Windows + G Keys, and then press the screen shot icon. XBOX Game App must be installed and enabled to work this shortcut. We should be able to enable Game bar by going to Settings > Gaming.

Press and hold the Windows logo key + Shift key and then press the S key. It will bring the Snip & Sketch toolbar as shown below. The same can be achieved by opening the "Snip & Sketch" app from the Start menu, and then click on "New Snip". 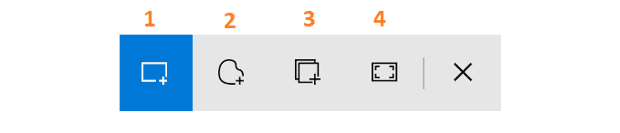 As shown in the above diagram, we have 4 different types of screenshots by clicking on the options.

Let us have a detailed look at each of these options.